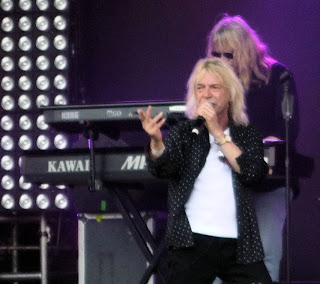 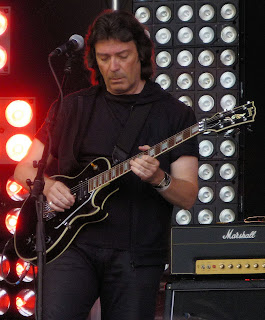 It was tight, organised and rolled along nicely but it felt like an eternity until they invited on all time great Ian Hunter to join them for a couple of numbers including Once Bitten Twice Shy. But unfortunately, it all ended in confusion as the organisers suddenly rushed on stage and cut them off in their prime. The sound just cut out, leaving Joe, Ian and Co completely caught between a rock and a hard place. A couple of heated exchanges ensued with the living legend looking as though he was about to wrap his acoustic around a stagehand's neck. Joe came back on to apologise and give thanks. Hmm, that was not meant to happen.
Anyway, it was getting decidedly cramped down the front and a couple of people tried to fill spaces which did not exist thus completely cutting out the view for one couple who had flown over from Fuertaventura especially to see the main event. To my right, a guy was actually sat down shielding his small child from the hurly-burly of the crush.
Well, there was frantic activity onstage and we were inwardly delighted to see the keyboard battery being assembled immediately in front of us. (We were about ten back from the front). There were a few technical challenges happening up there and stage right could be seen the Hammond hammerer joining in with the crew discussions to pinpoint the root of the problems and more importantly, how to solve them.
So we had to hang on another ten minutes but that is nothing when the overall wait has been more like 36 years.

Well, what can I say: they came, they saw and ultimately, they conquered.
In their 40th year, ELP are probably the most mythical of all prog rock bands and who in many ways have epitomised all its qualities and at the same time, all its excesses. However, no-one could ever doubt the sheer drama, diversity and dynamism of their music, which has always been the essence of prog because of its extraordinary and complex classical leanings along with a tasty slice of jazz. It has also been this classical thread which has set prog apart from the rest of the rock canon. And no-one, apart from perhaps Yes, has ever taken it to its classical extremes in the way ELP did.
Perhaps it was predictable that they should open with Karn Evil 9's 1st Impression, Pt 2 better known as Welcome back my friends. However this quickly ascertained that all three elements were still in good form.Greg Lake may have gone through a physical metamorphosis which now includes a Falstaffian girth but his voice still has that honeyed but urgent clarity and his bass lines are still as fluid and punchy as ever.
A still svelte Keith Emerson maintains that overriding air of intensity but no-one can attack a barrage of keyboards the way he can. The biggest regret was that some of those beautiful, spine- tingling chords from Tarkus just completely disappeared in the mix. He may have had surgery to correct problems with his most valuable assets, his hands, over the years, but the man is still the ultimate sorcerer when doing what he does best.
And Carl Palmer, let us just put a couple of facts into perspective. He along with Peter Trewavas was one of the only two musicians to play sets with two different bands over the weekend. Not even his contemporary Mike Portnoy with his current myriad projects could top that! Of the three elements, his was the most extraordinary contribution. If there were any aspiring drummers in the audience, then they would have done well to have observed the precision, power and exuberance of his playing. Remember, like the other two, he is now of "bus pass" age but is still right on top of his game.
There was some criticism of the choice of tracks but on reflection, it was only right they should draw from all their albums if only to showcase to those unfamiliar with the back catalogue and us purists were delighted they played Barbarian, Knife Edge and Lucky Man from the first album, all of which sound fresh and inventive.
Also seguing Take A Pebble from ELP 1 into Tarkus was an inspired moment and Pictures At An Exhibition also has stood the test of time well, (and the remastered DVD is out now).
But of course, those old flourishes of excess for which they are loved were all there. Greg was still parked on his Persian carpet, while Keith set about his Hammond with a couple of knives and upended it and Carl's drumkit started revolving and appeared to get stuck temporarily halfway around. His final flourish was removing his teeshirt for Rondo but give him his dues; not many 63-year-olds can boast a buffed and toned torso like his!
It was a pity so many people had to leave before the end because simply to have been there to witness the reunion of prog royalty for one night only was worth the admission money alone.
To reach the age of 52 and experience one of the greatest days of your life personally, musically and emotionally is mindblowing. Us old girls and geezers had the time of our lives, and it was so good to see so many people bringing along their sons and daughters even if a few of them were effecting Harry Enfield's "Kevin the teenager" stance!
There has been some talk about how it could be improved next year. I know most of us have our own wishlist for next year, headed by Rush, for my part their fellow compatriots Saga and Mystery, and maybe some elements of Yes and Genesis. Whatever happens, the critical mass is going to be the overriding consideration and finding a blend of bands who represent the past, present and future of rock is going to be a mighty task. They have set the bar very high this year. Next year, who knows to what new dizzy heights they can take it. We cannot wait! Sincere thanks and congratulations to everyone involved in making High Voltage the most sizzling festival this humble prog rock fan has ever had the privilege of attending.