High Voltage: The Prologue. How I came to love Wishbone Ash 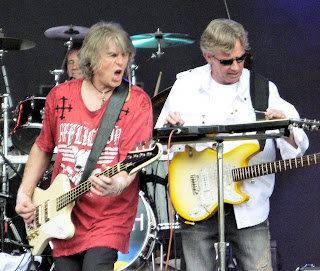 Every one of us must have a band we find difficult to love. Somehow, something trivial about them triggers a worm of discontent which starts burrowing deeper and deeper into your brain even though you tell yourself that they are exceptional musically, they have a huge following and it would be incredibly unhip not to like them.

Well, a seed of discontent was planted in my grey matter 34 years ago at Portsmouth Guildhall. I was training to be a journalist at a local college and was more than happy to blow part of the student grant on some of the excellent gigs the Guildhall was staging, such as Tangerine Dream, a concert which did not exactly have them dancing in the aisles.

However, yours truly and my then boyfriend, both great rock fans - but with one or two notable exceptions, had the opportunity to go and see Wishbone Ash playing there. This would have been the New England tour in 1976 by which time, the divine Ted Turner had been substituted on guitar by Laurie Wisefield.

Now, the significant other was very astute at spotting b*llsh*t which, around this time, made us probably the only people on the planet who found Peter Frampton coming alive very funny. It just did not work for us, but it did not make us bad people as a result. Each to their own.

Anyway, the evening at the Guildhall (and some of you might remember this) started with Supercharge, fronted by the splendid, eccentric singer/saxophonist, Albie Donnelly. They were rather fun and provided all the ingredients to get the old Victorian edifice rocking.

So it was all going well for the main event until a chap in brown overalls came on and started vacuuming the carpet on the stage. My close companion's radar was on full alert at the very sight of it as this was not very rock 'n roll; and anyway, Greg Lake had the monopoly on carpets (and I will revisit that in another blog).

It was Wishbone Ash-time, and the worm started to burrow. The music sounded fine, but it was just not happening for us. Ted, bless him, always seemed to play from behind his hair as proved by the recent reshowings of their brilliant Vas Dis on BBC4's "Prog at the BBC" programme.

But Wisefield just gave it the full-on, "look at me, I'm a rock star" routine "and what is more, I am playing barefoot." Pretentious? Moi? Aha! Hence the jobsworth with the Hoover. I am sorry but by the encore, we were both having an attack of the Peter Framptons and left in fits of laughter before the end of the concert. This is the one and only time I have exited a gig before its official end and of course, that left an indelible negative mark on my perception of the band.

Fast forward about four years, when I was working in my first reporting job for the local paper in Leighton Buzzard, Bedfordshire, home of Kajagoogoo, Bob Monkhouse and the Barron Knights. One of a cub reporter's jobs is to phone all the local Plod to find out if anything "interesting" had happened overnight like a cat getting stuck up a tree. One day, we heard there had been a burglary at a house in one of the outlying villages - at the home of a Mr Andy Powell, and I think it was even confirmed by the Bill that he did play with some kind of beat combo!

Well, as the compiler and writer of the paper's entertainment pages, it was my duty to follow this up. I somehow managed to secure an interview with the great man through his management company and went out with the photographer to meet him.

He and his wife could not have been nicer. He showed us around his home, his soundproofed studio and we got to meet the famous Flying V. I felt so guilty and I think I got as far as telling him I had seen the band - without drilling down too much into the detail of having not made it through to the end. But the feature was published and everyone was happy.

Which brings us right up to the present and High Voltage. Co-incidence number two happened early on the Sunday, when the hotel breakfast room got rather oversubscribed, so various festival goers were left waiting around before tucking into their croissants and fresh fruit. A guy turned up about ten minutes after us and was waiting in a dentist's chair for a table to become free. He stood out because he did have on a rather distinctive green patterned shirt, which suddenly reappeared in front of us about three hours later on the Prog Rock stage, this time, with an axe strapped across it. It was Danny Wilson, one of the Wishbone Ash guitarists.

I had said to Martin (my chap) that I really wanted to see Martin Turner's Wishbone Ash if only to lay to rest the ghost of Laurie Wisefield who had been mainly responsible for this 34 year Mexican stand-off. Also, several Facebook friends had been raving about this current line-up.

Well, what can I say? Theirs was the best set of the day, in my humble opinion. Hearing Argus again was an absolute revelation. It really was one of the greatest albums of the early 70s. The band really delivered. They were tight, they were fun, they rocked and really caught the spirit of the festival.....and that was even before Ted Turner joined them.

It was like seeing a piece of history being made as he joined his namesake to reform the Argus Two and launched into a magnificent Blowin' Free. Ted looked amazing, cool, composed and more importantly, he played like a dream. Martin Turner remarked that he had obviously been practising! Not 'arf, pop-pickers.

Anyway, as the day progressed and while there was an interval between Magnum and Uriah Heep, (happens all the time), Martin and I finally had a chance to sit down by the dodgems - (this was the funfair for the common man). Suddenly, I saw two familar faces walking towards us. It was one of those "I should know them" moments and the penny quickly dropped. It was Danny Wilson and the other MTWA guitarist, the ever-happy Ray Hatfield. I just grinned at them and blurted out "Great set"! They smiled back at us.

That was it. The ghost had been laid to rest and the worm had finally turn(er)ed!
Posted by Alison at 08:09