Celebr8? We most certainly did!

A month has lapsed since probably one of the best weekends of my life - and indeed, it was for many others.  In fact, if ever there was a good portent for the London Olympics, then Celebr8 could certainly claim bragging rights as it was one of the friendliest and happiest gatherings it has ever been my pleasure to attend.

The choice of venue was interesting enough, the Hippodrome being a swinging hot spot for the local night owls with rather interesting steampunk décor which put one in mind of Rush’s epic Clockwork Angels’ artwork. This was not the kind of haunt 600-plus prog rockers of a certain vintage, dressed in predominantly band logoed tee-shirts and jeans would usually frequent but there is a first time for everything.

The run-up to the festival had not been without incident, Mars Hollow being one of the bands due to appear but because of a shake-up in their line-up, they were unable to participate. However, promoters Jon and Geoff had built up such a close rapport with the band’s former bassist, Kerry Kompost that he and fellow Californian musician and composer, Matt Brown, were invited over to play on the festival’s acoustic stage. What is more, several members of the audience had flown in from the US just to be at this festival and very welcome they were too.

I also had the very pleasurable task of picking up Kerry and Matt from Heathrow Airport who were like two very animated Tiggers as I delivered them to the hotel in Kingston on the Friday.

However, the cast that Jon and Geoff had assembled was probably the best prog line-up seen on any a stage in many a year with IQ and It Bites headlining the two nights, with Pallas, The Tangent, Sean Filkins, Magenta, Touchstone (stepping in for Mars Hollow), Tinyfish and the Dec Burke Band completing the mouth-watering bill. This was without doubt the perfect showcase for the best of British rock with Pallas representing Scotland and Magenta Wales.

The audience was also veritable who's who of prog with members of Twelfth Night, Galahad, Maschine, Crimson Sky, Praying Mantis and the Fierce and the Dead. One Steven Wilson also popped in on the Saturday.

And so to the performers themselves.

Sean Filkins created a sensation last year with his debut solo album War and Peace & Other Short Stories which topped many a prog fan’s album of the year. The challenge was to bring together some of the intricate and ever-changing compositions live on stage.

Due to the late opening of the doors on the Saturday (one of the very few glitches), the audience was still filing in when “Are You Sitting Comfortably?” started his set. However, drawing on a seasoned
band of musicians including his long-time musical partner keyboardist John Sammes and guitarist, Geoff Webb, Sean and company miraculously reproduced a stunning selection of the album’s best songs, all played with great dexterity and understanding.

The biggest surprise was the inclusion of 21-year-old guitarist Daniel Maher in the band who totally confounded everyone with his command of some of the complex solos within the album. The highlight of the set was Epitaph for a Mariner, Pts 1 to 5, an incredibly moving and multi-textured series of dreamy soundscapes, all inspired by and dedicated to Sean’s great-grandfather. Sean sang this all and the other stunning songs with great power, emotion and range, due in no small part to his own father being in the audience watching him.

It was very much an afternoon for musical sorcerers like Sean to show off their apprentices and The Tangent has two young prog wizards in the making, 23-year-olds Luke Machin and Dan Mash who are under the tutelage of keyboard maestro Andy Tillison with stalwart drummer Tony Latham completing the line-up.

If there was one band who captured the whole spirit of the weekend then it was them when they completely wrong-footed the audience by starting their set with the funkiest, hottest rendition of Celebration this side of Kool and the Gang. Who ever said prog musicians weren’t versatile or had a sense of fun!

Their performance was so intense and frankly beautiful, several members of the audience were openly weeping. Starting with The World That We Drive Through, even in the ten short months since I last saw them at the Summer’s End festival last year, the band has taken itself to a completely different level. This is due to the incredible chemistry which now exists between the four of them. There is no finer guitarist in prog than Coolhand Luke from whom the most fluent and jaw-dropping runs flow which he articulates so naturally through his facial expressions.

Dan is now commands the bass grooves with real authority and style. The rest of the set comprised The Wiki Man, The Winning Game and Where Are They Now? For many, this was the performance of the weekend.

Next up were Pallas, one of my current personal favourites in the UK prog scene, because of the way, through their stunning album XXV last year, they have re-invigorated themselves and set out their stall as one of the most exciting bands both live and on record. This was the fourth time I had seen them in the past two years and this was them at their most electrifying best.

With a setlist spanning their 30 year career, they exploded with energy, their huge guitar-driven wall of sound crackling with moodiness and menace. New frontman Paul Mackie, affectionately known as Iggy Prog, gives them a real edginess with his penetrating gaze, stage theatrics and powerful voice.

Most of the set comprised XXV but bassist Graeme Murray and keyboard player Ronnie Brown stepped up to the plate for Midas Touch with its haunting middle section of Murray’s voice and bass with Brown’s deft dreamy touches. Niall Mathewson coaxes both melody and ass-kicking licks from his guitar and drummer Colin Fraser keeps the whole machine ticking along precisely. What is more, they delivered it all with great humour and heart.

And so to Saturday night headliners, IQ, performing their Subterranea set which they also presented at RosFest this year. This was the nearest thing to prog opera as it gets as they retold the story of a man held captive and isolation, the subject of an experiment when he is deprived of sensory perception and then let loose into a world he cannot comprehend. A more powerful piece of rock
theatre it would be hard to find with singer Peter Nicholls the focal point throughout.

It was extraordinary, the musicianship of the first order with Michael Holmes on guitar and Neil Durant linking up for some beautiful keyboard-drenched passages. Rounding off with Frequency and The Wake, this was a timely reminder on how this band has helped to shape the prog landscape over the past 30 years.

Day two arrived and kicking off was the Dec Burke Band who has been a stalwart of the House of Progression scene and a personal favourite of Jon Patrick. Their hard-driving, pull out all the stops style of prog blew the cobwebs off the venue with Dec, former guitarist with Frost*, and the boys showcasing some of the songs from his Destroy All Monsters and Paradigms and Storylines’ albums including the killer song March of the Androids.

As ever, his band were tight and together and die-hard fans also noticed the inclusion of Breathe It from Dec’s previous band Darwin’s Radio to round off the set.

To the enigma of the weekend, Tinyfish, alas playing their last concert for the foreseeable future due to lead man Simon Godfrey’s hearing problems. Carrying out their soundcheck in front of the audience was the cue for much merriment especially with Simon wearing a Princess of Prog tee-shirt two sizes too small which was secured to his jeans with gaffa tape. Their eccentricity is only matched by their brilliant brand of prog with thoughtful guitar-led songs laden full of melody and touches of magic.

What makes them special is down to so many elements - Robert Ramsay, their Master of Ceremonies, making four appearances in different changes of costume, drummer Leon Camfield channelling The Muppets’ Animal, guitarist Jim Sanders making it look easy and bassist Paul Worwood playing it cool. The self-proclaimed smallest prog band in the world will be sadly missed and the huge ovation they received demonstrated the esteem in which they are held.

Touchstone was the late addition to the bill following Mars Hollow’s withdrawal from the bill and how they made the most of the opportunity they were presented. This upcoming band features 21-year-old Henry Rogers on drums, who also plays for DeeExpus, so another prog star in the making. But the focal point is winsome singer Kim Seviour who possesses a voice of great power and clarity that soars over Adam J Hodgson’s meaty guitar licks, Moo Bass’s stomping bass and Rob
Cottingham’s driving keyboards.

Playing a selection of songs from their three albums including the title track off the newest, The City Sleeps, they saved the best until last when Kerry Kompost joined them onstage to perform Tears For Fears’ Mad World. It was a great high energy moment of the gig with Kerry trading licks with Hodgson.

From one lady singer whose star is on the ascendant, they were followed by Magenta whose singer Christina Booth is one of the most respected vocalists on the prog circuit and again, they did not disappoint. Her soaring voice is one of the hallmarks of the band, their music very much rooted melodic side of prog with hints of Yes and Renaissance prevalent in their sound.

Clearly another band totally enjoying themselves, they rocked their way through a showcase of songs
from their illustrious back catalogue and their latest album Chameleon including Red which was one of the stand-out tracks of the set. In particular, guitarist Chris Fry was totally on fire throughout.

And finally, the climax of Sunday arrived with It Bites currently enjoying a renaissance due to the release of their latest album Map of the Past, which is destined to become a classic.  Guitarist John Mitchell had flown back from the Loreley Festival where he was appearing with Arena and admitted to the audience he was feeling rather tired.

However, this did not stop them putting on a show of great virtuosity that again dipped into their illustrious albeit rather brief back catalogue of four studio albums in the past 26 years. Kicking off with Ghosts and Oh My God from the Tall Ships album, they hit their stride with All In Red, one of their early hi energy songs which still sounds fresh.

Mitchell had problems with his amp which meant he had to stop midstream between Send No Flowers and Meadow and the Stream from the new album, but they stepped it up a gear afterwards with Underneath Your Pillow which had everyone rocking.  For my part, the highlight was The Last Escape, the most hauntingly poignant song from Map of the Past that Mitchell dedicated to the late Andrew Colgan about whom I want to write at some future juncture.

Ending their high octane set with their anthemic Calling All The Heroes could not have been a better
song on which to end. The weekend was all about heroes, mainly Jon and Geoff who had the vision and the courage to stage the festival;  Kerry and Matt for coming over to appear at the festival and the wonderfully supportive audience who gave every band a rapturous reception and deservedly so.

Sadly, apart from Kerry and Matt,  there was little time to see the wonderful cast - Matt Stevens, Gary Chandler, Alan Reed and Mark Spencer, appearing on the acoustic stage.

Plans are now afoot for Celebr8 2 next year, so I would suggest you all block off May 2013 in your diary now. 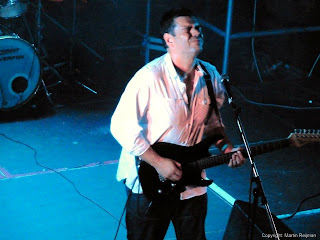 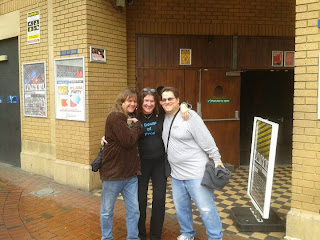