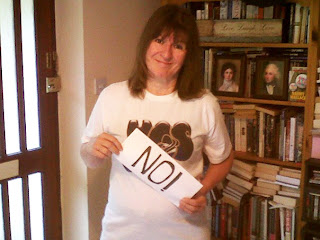 How do I start writing about an issue so fundamentally painful as observing something wonderful - an integral part of your life in fact - that you have seen develop, grow, evolve and progress over the past 40 years suddenly come crashing back to earth, its engines misfiring after attempting to follow a flight plan which is now 30 years out of date?

Even now, as I listen to Fly From Here for the countless time, I feel such a sense of disbelief that this is indeed the latest musical permutation of Yes, the unique, heart-wrenchingly, soul-searchingly, proud and inspirational band I have loved with a passion since 1971.
Fly From Here I have tried so hard to love, but it is  not loving me back the way so many of their previous albums have done. In fact, the more I hear it, the more I feel air sickness and turbulence setting in.
Their greatest gift  has been to create and present unique soundscapes, full of soaring dynamics and multi-layer instrumental textures, enabling the individual members the freedom to take off on flights of fancies especially through using the extended compositions as their vehicles. All were individual journeys, full of beautifully, brilliant crafted passages, which took you to the higher stratospheres of your imagination and dreams. Most Yes songs had a flight plan and a direction, and as a result, the majority reached their destination safely, smoothly and often spectacularly.
It has now been 10 long years since the last Yes studio album Magnification, admittedly not one of their strongest collections, but again a bold directional move using an orchestra to fill in the sonic space which became available due to the departure of three key band members.
Fast forward to 2009 and as well as the continued absence of Rick Wakeman, Jon Anderson is no longer in the ranks for reasons discussed elsewhere in a previous blog. No more will be said about these two omissions as they are not integral to this plot, nor will any comparisons be drawn as have been made endlessly elsewhere.
The introduction of Benoit David and Oliver Wakeman to take their places did result in an extraordinary first night of the British tour in Birmingham in November that year. It was Yes, but not as we know it.
So to the album: to my mind, there has always been something very special about the distinctive Roger Dean-conceived Yes logo.  Yes is a musical quality mark which tells you that what you are getting under this particular banner is something out of the top drawer and therefore, always worth having. It might vary occasionally, but overall, it does give you a bigger bang for your buck, especially if you are a prog rock fan. They are, after all, right up there in the holiest of the holies among the true legends within the prog pantheon.

So here, we have both the time and the word, so to speak.
Then along comes a blast from the past in the shape of Trevor Horn, such a key figure in helping to change the direction, shape and sound of Yes, and most of it for the good. From his involvement along with Buggles partner in crime, Geoff Downes, Drama still holds its own in the Yes timeline. He then shook the commercial Yes tree with 90125 and had a hand in the production of its less well-received follow-up, Big Generator.
So thirty years later and Tempus Fugit, to coin the title of one of the better, inventive songs from Drama. So one wonders if bringing him back at such short notice to produce Fly From Here was really more of a quick win for the current line-up now with Downes back in harness in favour of Wakeman Jnr.
On the back of this latest team shuffle comes the reconfiguration and lengthening of the title track from the Buggles' back catalogue along with another Life on a Film Set which are essentially the backbone of the album along with the new whole band effort Into The Storm.

So, overall, the whole offering sounds retro and refried. Even ELP, when they decided to record another composer's songs, it tended to be someone of the stature of Mussorgsky or Aaron Copeland rather than a former producer with a few offcuts to shift. This in essence is why I think Fly From Here is such a disappointment. For me, it never ever takes off or spreads its wings; and instead of moving forward, it puts on the reverse thrusters and lurches into a holding pattern somewhere between clear skies above and a dark, foggy airport below.

The greater part of Fly From Here is pleasant enough- uplifting in part, building well with some stunning harmonies, but it so lacks that spine-tingling magic and wow factor, which marks out some of its predecessors.  And on the issue of whether Benoit David is capable of filling the vocal responsibilities, he has a fine, pure strong voice which slots perfectly midway between the Anderson and Horn pipes, so the casting probably could not be better for this particular piece.

But the moments which kill it for me are contained within the ghastly Bumpy Ride which goes right to the top of most hideous Yes of all time track list. What were they thinking! Consciously or unconsciously, these moments of Keystone Kops prog madness appear to either parody or mock the  great sonic musical motifs which have been at the cornerstone of all Yes music. And positioning it in the middle of one of the most haunting passages of Fly From Here throws the whole lot out of balance.

However, what is apparent throughout is far from allowing the music ever to cut loose and get some height on the dynamic or sonic altometers, air controller Horn has contained it within the confines of a flying machine, the result being it sounds too compressed, pressurised and hermetically sealed. Those fantastic instrumental textures disappear and became flatpacked in the mix. This is particularly evident for the guitar sound which does not do justice to the terrific licks and runs for which Steve Howe is so renowned. He sounds here as though he is playing from the depths of the departure lounge.


The official side two also has its low spots. Both Chris Squire and Steve Howe have added their own "solo" spot, Squire's coming through The Man You Always Wanted Me To Be, an acoustically-led five minutes of not-a-lot which would have been better as a filler track on one of his solo albums rather than a full-blown Yes work-out.

And Howe, well, indeed how! Again, it is the production which reduces his solo Solitaire into a tinny, trite exercise instead of one full of deep resonance and passion.

Life on a Film Set could have been a much better song if the instrumentation better reflected the repetitive "riding a tiger" but at least mid-section here has a great melodic hook to which Benoit adds the vocal overlay that does at last harken at previous greatness, albeit predominantly from the Buggles canon.

Hour of Need is another track which gets half-strangled by the packed-down production with both the jangling guitars and piping keyboards sounding too restrained against some very tight harmonies.

Into the Storm is probably the only song on the whole album which does offer any resemblance of flair and originality, probably because it is an original group effort and so does travel forwards rather than backwards. All the trademark little flourishes are there including an extended Howe workout and the lyrics even have a dig at being as stupid now as they once were; but I hope the rumours circulating that some of the more barbed lines are aimed at a former key band member are untrue. That would add to this album being even more budget-airline, ie cheap and charmless.

Believe me, this has not been an easy assessment to write. Having to bite back at the band which has fed, nourished and sustained you for most of your life and written most of its soundtrack does not feel like a fair deal so late along the line. And not even an original lush Roger Dean cover can disguise what lies beneath.

This flight feels as though it was engineered by contractual or business obligations. Rather than being initialled with loving care, the current Yes is existing through this strange device, an amalgamation of what has gone before rather than a brand new adventure into the possibilities ahead. I shall not be taking off with them if they decide next time to again choose the former rather than the latter.